How one blog post changed the traction for my startup 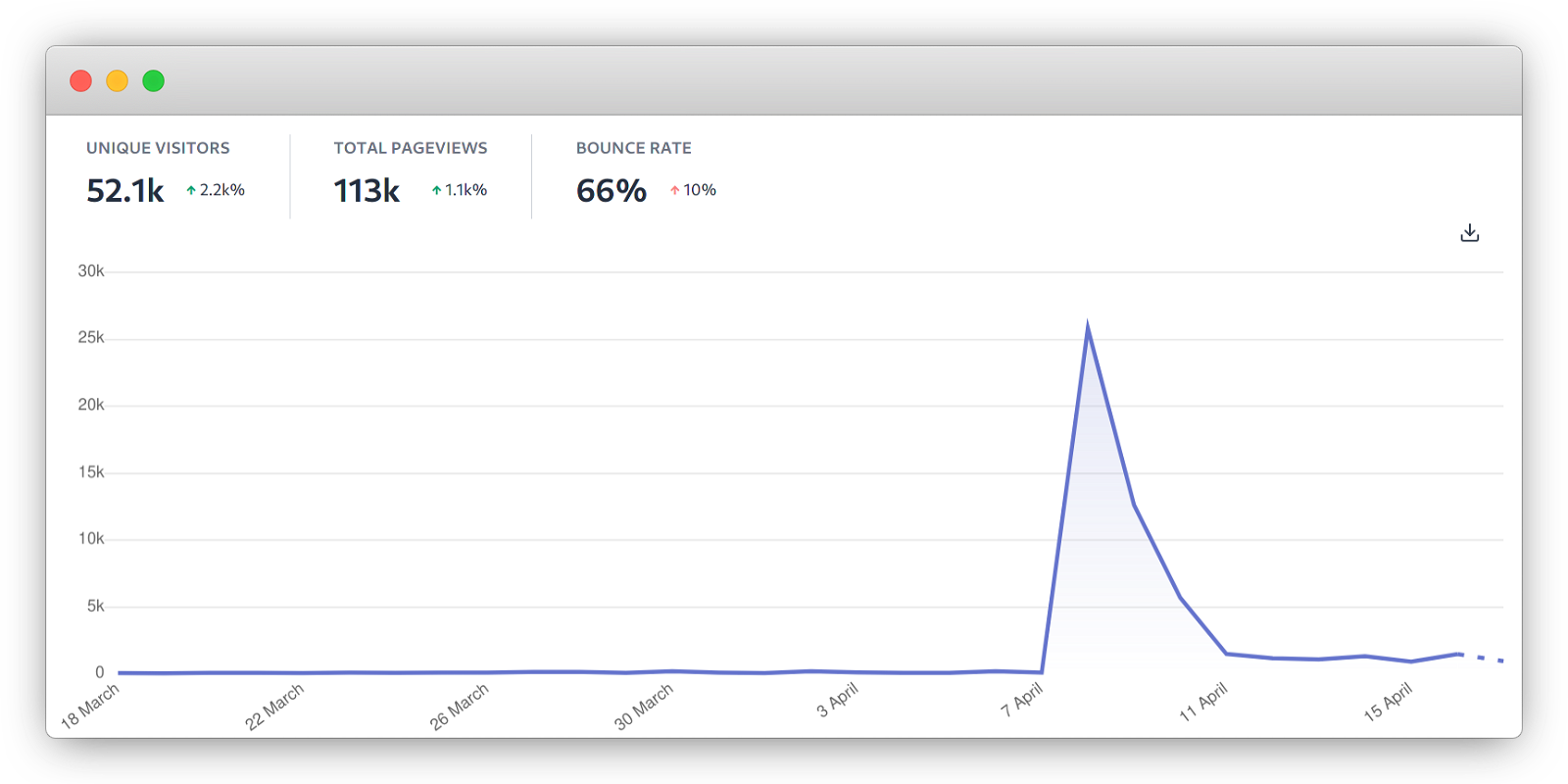 We recently relaunched Plausible Analytics as a no-cookie, GDPR compliant alternative to Google Analytics. We had some very eventful days and here’s what we learned.

We released a new product update, new website and the first blog post in a new series. This resulted in us breaking all of our website traffic and trial signup records. We were overwhelmed with feedback, comments, opportunities and new ideas too.

Here’s an overview of all the steps we’ve taken over the last couple of weeks and lessons we’ve learned that may help others in the indie startup community get their products out to more people too.

Results of the first week after the “relaunch”

The results were overwhelmingly positive:

So this “relaunch” changed the traction of our startup, the goalposts have moved. Here’s a deeper look into the actions we took.

Running a startup is about releasing new features and building a better product, but marketing and communication play a very prominent role too. A lot of work we did was to try and communicate better what our product does and why it’s worth considering.

No-cookie was a big feature for us so we decided to change and improve the home page at the same time. The thinking behind the new home page was to position us clearer as a Google Analytics alternative.

It is a fact that most websites use Google Analytics for their website tracking and that many of the people that sign up for Plausible usually do so coming from Google Analytics.

On our new home page, we wanted to explain what Plausible does and how it differs from Google Analytics. It’s a David vs Goliath-like situation as we’re a brand new startup while Google Analytics is installed on more than half of all the websites online.

The idea was to focus on things that we do differently and perhaps even better than Google Analytics. There’s no other way that a new startup can compete with a market leader.

To come up with differentiators to focus on, we looked at what Google does wrong in our eyes, we collected all the feedback we had from our customers, from other people running websites and from researching things people talk about and search for. These differentiating features of Plausible fall into several categories:

New Plausible Analytics comparisons with the most popular providers

Both of these analytics products are powerful and well known by web developers and site owners. The intention with the comparison posts is to help us help them easier figure out what the differences are and why Plausible Analytics might be worth a look.

How we do marketing for Plausible Analytics

So with the new product update out, the new home page live and product pages online too, what steps did we take to drive traffic and raise awareness?

As a bootstrapped startup that is focused on providing a privacy-friendly alternative to Google Analytics, we have also decided not to focus on the traditional way of promoting a startup.

Many startups promote themselves using paid advertising on Google, Facebook and similar. This makes them part of the surveillance capitalism industry as targeted paid advertising requires a lot of personal data.

It’s also a very expensive and risky way of doing marketing that few without venture funding can afford in the long run. We may experiment with more ethical and privacy-friendly paid advertising in the future, but we’re focused on organic marketing for now as we believe that has the biggest potential.

So if you don’t use paid advertising, how do you attract an audience?

Content marketing has a big role to play here. We aim to publish content that helps people out. That may mean that we answer relevant questions that people have. Or that we solve relevant issues people are struggling with.

Content marketing doesn’t bring instant results like paid advertising does. You may put in time and effort to create a great blog post, and when you publish it, nobody might be there to see it. On the other hand, if you start a paid advertising campaign on Facebook now chances are that you will see a few clicks immediately.

Content marketing is a long term game. Unlike paid advertising which in most cases stops delivering results as soon as you stop paying for it, content marketing can deliver results weeks, months and even years after the original work has been done.

It takes a dedicated and concentrated strategic effort over a longer period of time to start seeing results but it keeps delivering results for longer too.

The first post we published in a new series on our blog was the obvious choice. It was based around a product that everyone in our target audience knows and has direct experience with: Google Analytics.

Some love, some hate it, some are indifferent. Some use it on all sites, some spend hours on it daily, most used it at least once in the past and everyone has an opinion on it. We published a post that looked into reasons why a site owner should stop using Google Analytics on their site.

It took a few days to research, write and edit and then we had almost 2,500 words of very relevant content that would be interesting to many people in our audience. We published the post and crossed our fingers.

This is where many people make a mistake and think that after publishing all the work is done. That’s false. The promotional work only starts after the blog post has been published.

After the content is published we need to try and see how we can reach a relevant audience of people interested in it.

Plausible Analytics is fairly new and we don’t have a large audience, so any content that we publish without taking any steps to actually share it with the world will most probably go unnoticed. No matter how great that content may be.

Especially in the early days of a startup, it’s really important to take steps to proactively go out there and share your message. Don’t spam people. Don’t go random places.

Find relevant communities and sites where people have shown interest in the topic you’re covering, join those communities and engage with them, and then share when you have something interesting.

We shared the post on our Twitter and Mastodon accounts, we shared it on Indie Hackers, Lobsters, Hacker News and Reddit too. At this stage with the post being in those communities, the things are really out of our hands.

Will the community pick it up? Will they ignore it? Will we get lucky so some people have a look before the post gets lost in hundreds of other posts, threads and submissions?

We got lucky with this post as people found it useful. And this is where the spike in traffic came from.

What we plan to do next

So what’s going to happen in the upcoming weeks and months? We plan to work on improving our product, our website, our communication and we plan to publish more useful content that we hope people may find interesting.

You can argue that the only way from here in terms of traffic is down. We hit the ball out of the park on our first blog post and this is an incredible result that is difficult to achieve very often.

It’s important to have realistic expectations when trying to promote a company using organic means. We will do our best and try to make progress each and every month. Growing a startup is a marathon, it’s not a sprint.

In the meanwhile, if you’re looking for an alternative to Google Analytics for your own website, do register for a 30 day Plausible Analytics trial.

It’s free, you can use it unlimited, no credit card is required and it’s so lightweight you can easily run it alongside Google Analytics without any impact on your page speed. Test it and decide if Plausible Analytics is something worth removing Google Analytics for.

Written by Marko Saric
Hi! We are Uku and Marko. We're building a lightweight, non-intrusive alternative to Google Analytics. You can read about our journey and what we've learnt along the way on this blog.
Next post

Why you should stop using Google Analytics on your website